The BEHAVIORAL modification of crows 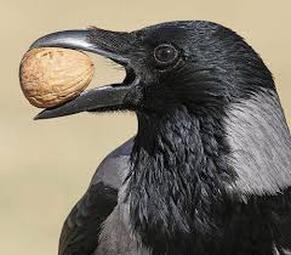 Similarly to humans, animals have the capability to change their behavior. One specific animal that has learned to thrive in our urban cities is the crow. To begin this argument, we are going to begin with a basic example of how animals change to fit their environment. Behavior is an easy modification for animals to make because there are no genetic changes needed. Genetic changes can take a few generations to take effect, but behavior can be modified instantaneously. An example of changing behavior to fit an environment is evident in the common black crow using the force of our vehicles as a way to open walnuts. This example shows a change in behavior and is not a form of evolution or natural selection since there is no change in the genetics of the crow.
Walnuts are a tough nut to crack, at least for the common black crow. Crows generally eat a wide variety of nuts, and their beaks have adapted as a result to be short and thin (Partecke, 2006). This beak helps crows to crack open the nut with more force, but it still isn’t strong enough to crack open a walnut. Within city limits, walnuts are more prevalent than they are in a forest or a natural environment crows would normally live in. However, the casing on a walnut is much tougher compared to other nuts, so the crows learned to modify their behavior.
In 2000, a study measured crows’ intelligence in relation to opening walnuts. Researchers predicted that the thickness of the walnut would require the crow to drop the walnut from a greater height. The bird would pick up a walnut and proceed to fly in the air and then drop the walnut. The force from the fall would crack open the walnut and allow the bird to feed. Scientists noticed a few different variables involved in this process. In the city, researchers observed many crows and the height at which a crow dropped a walnut, the hardness of the surface the walnut was being dropped on, and the thickness of the type of walnut being dropped (black walnut or english).  This prediction was confirmed through the observations. Interestingly enough, the researchers found something even more unique. Instead of dropping walnuts from great heights, crows will either drop or place the walnut in the middle of the street where it can be run over by a car (Partecke, 2006). The impact from the vehicle will crack open the walnut and provide an easy and effective food source.
While this example is not a direct form of evolution, it is an introduction into the subtle ways in which humans impact the life around us. There is no gene for placing a walnut in front of a moving car, but this is an example of how animals are changing their way of life to co-exist in the ever-changing environments humans create for them. The structures we built may seem innocent, but they have profound impacts on the ways of life around us. We may not be aware but in order to survive, the animals need to modify their behavior to survive.