The evolution of bobcats 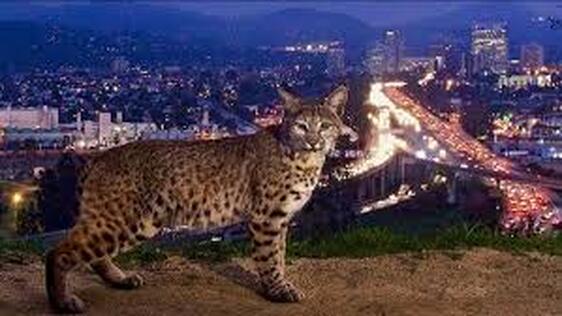 In Los Angeles, it’s very common to find a bobcat roaming in your backyard. In addition to finding them in your backyard, they are frequently roadkill on the sides of roads and highways. A bobcat commonly seen in a nearby park gained the name “Griffith Park Puma'' for its frequent appearance in Griffith Park in the Los Angeles area. Oftentimes, bobcats set off motion detected cameras while searching the area.  A male bobcat usually requires about three square miles of territorial area and a female requires a mile and a half (Ordeñana, 2012). Because of the close proximity to humans, there is likely to be overlap in bobcat and human territory. The large highways in Los Angeles dissect two large populations of bobcats. One of the populations developed mange and the resistance to mange, a parasitic disease, but because the two populations are unable to interbreed with each other, the other did not. This example will show how human-made structural barriers can affect evolution.
Humans have managed to make transportation very accessible in the world we currently live in. Roads, freeways, and interstates connect all parts of a continent together. Animal crossings are very common and often end in fatalities. Humans have tried to provide safe passage for animals through underpasses, overpasses, tunnels, and other structures, but oftentimes animals do not use these. It’s difficult to teach wild animals which structures are safe to cross, and which are not. Because of how often bobcats are killed on the side of the road, animals have learned to be hesitant to cross and therefore they do not use the routes of safe passage.
North of the Los Angeles area, there are two large freeways that bisect the wildlife. Since the bobcats are relatively close to human populations, they have learned to somewhat co-exist. In order to preserve themselves, the bobcats shy away from the roads. Since wildlife rarely cross the freeways, there are two distinct populations of bobcats on either side of the structures. The bobcats nonetheless live in the same environment on either side, so the two populations, though divided, were very similar. At least until the  west-side population was exposed to mites and developed a mange epidemic. Notoedric mange is a parasite that lives on the skin or hair of an animal. Mange leads to hair loss, intense itching, and irritated skin. This in turn can cause lesions, infections, and dehydration. The mites feed off the immune system which can compromise the defenses an animal has towards diseases and pathogens. Mange has a high mortality rate in bobcats (Worrell, 2018).
The evolution of resistance is very commonly known in antibiotics and bacteria. If a bacterium is overly exposed to an antibiotic, the bacteria will build up resistance and become immune to the antibiotics. Resistance is also possible in other organisms and more recently it has been evident in a population of bobcats living in Hollywood. When the west-side population was exposed to mange, almost 80% of the bobcat population was infected. This caused a high mortality rate within the population. But that high mortality rate led to strong natural selection for the bobcats that were resistant to mange. The resistance to mange was monitored by local scientists who kept the bobcats under close observation from a distance. The resistance to mange gave bobcats an advantage on the west-side of the freeways.  (Worrell, 2018). The bobcats were still separated from the other population by the freeway, so the infected population was unable to spread the disease, but that also meant that they did not mate with the other population. Since the gene pool and the population decreased, the surviving bobcats in the stricken population were forced to mate with each other. This led to a lot of inbreeding, but it also led to the bobcats passing on their traits for mange resistance.
Because of the human made barriers that separated the two bobcat populations, the two populations that were once very similar were now quite different. The population of bobcats that was exposed to mange was able to evolve a genetic advantage to better handle the disease.  This example provides evidence to how human made barriers can largely affect the evolution of animals. One population was able to evolve, but because the two populations were separated by freeways, they were unable to intermix and evolve the same advantages.