The evolution of nocturnal Animals 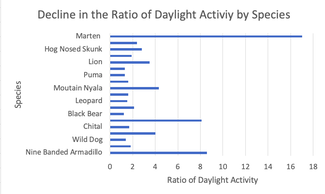 Most humans are diurnal; we are awake and active during the day and we sleep through the night. Shifting to being nocturnal can be harmful to your physical health and your schedule, but those who work the night shifts know how struggling it can be. One helpful way to ensure the transition is ideal is finding the right place to sleep. It’s difficult to rest when there is light shining through the blinds. In order to have a seamless transition, experts recommend slowly pushing your bedtime earlier and earlier (Morello, 2016). Sleeping patterns are necessary to the health and the wellness of every creature, including animals. Because of the small interactions we have with animals, this has caused many species to shift their daylight activity hours to the night, a shift to being nocturnal. This has caused many of these animals to evolve nocturnal features such as increased sensitivity to light and stronger sense of hearing and smell.
Another way that humans have shaped the evolution of animals is through their mere presence in animal environments. Many animals are diurnal, just like us. This means they are awake and active forging during the day. Many of their daily activities and cycles revolve around their circadian rhymes being in tune with this trait. The threat of human presence is causing a shift in many animals from diurnal to nocturnal. Whether we realize it or not, our interference in the daily lives of animals is threatening their existence. Oftentimes this can be as simple as hiking, going for a walk, driving to or from work, or even gardening/farming.
Many animals are affected by our interference. The sun bear typically spends 80% of its active hours during the light hours. But because sun bears want to avoid humans, they now spend 90% of their waking hours at night. We see a similar trend in other carnivores such as black bears, grizzly bears, tigers, leopards, and coyotes. This trend is not only evident in carnivores, but also of hooved creatures, herbivores, and omnivores. Many different types of deer shifted at least 30% of their waking hours to the nighttime hours. Other hooved creatures such as the sable, the impala, the nyala, and the chital were observed with a similar shift (Flagg, 2018). More data can be seen below.


​          While the characteristic of being nocturnal may not entirely be genetic, there are certain traits that nocturnal animals have that are genetic. Since the animals need to be able to see better at night, their eyes have adapted to be more sensitive to light and are able to see during the low light of the night. In addition, their sense of hearing and smell has amplified (Learn, 2018). Human interference is the sole cause of the nocturnal shifts of these specific animals. These shifts were not noticed until human interaction had increased. If this shift was caused by any other animal predators, these animals would have become nocturnal much earlier. There has been no new predator introduced to their environment other than humans due to our increased activity (Flagg, 2018). While we saw above that the urban dwelling blackbirds and mosquitoes had adapted to live with humans inside of our cities, these animals have adapted to avoid humans and become active during their dark hours.
It is very evident that human interference has greatly impacted the evolution of elephants and the countless other animals who have become nocturnal. With multiple different species of animals reducing their daylight activity hours, this causes the nocturnal traits to evolve in those species. Our most obvious impacts are through global warming, deforestation, and land development. We may not realize how our small daily activities have a large impact on the evolution animals undergo.