​THe evolution of  fireflies 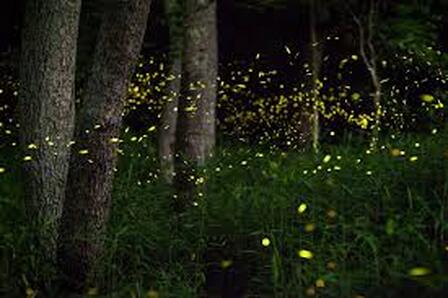 As a kid, you probably spent a few summer nights racing around the backyard trying to chase down fireflies. You would see a flash of light and then the bug would disappear into the dark. Then you’d see another flash as you continuously tried to capture the flashing luminescent light. Your parents always made you let the fireflies go because they knew if you kept them in a jar, they wouldn’t make it long. But have you ever thought of what the flashing meant? Why had these bugs adapted a flashing tail? What purpose could it serve? How was this an evolutionary trait? There are many insects that use displays in their courtship of a mate. This is why they glow at night. Male fireflies and glow worms use bright displays of bioluminescent lights. In addition, there are a large number of insects that use visual cues to court mates (Desouhant, 2019). Typically, courtship for these insects happens at night. Mating is crucial to the survival of animals and insects. While using lights at night may seem innocent, it does have an impact on evolution. The use of artificial lights at night overcasts the small bioluminescent flashes that fireflies and glow worms use to attract mates. This in turn caused these insects to shift their manner of attraction.
The biggest obstacle that insects have come across is mankind’s use of artificial lights at night. While we use our lights for a variety of different reasons, we are able to continue our daily lives into the night after the sun has set. These lights can stay on all night in order to brighten streets, cities, homes, business, etc. at all hours of the day. Dark hours within a few miles of these areas no longer exist. While artificial lights are very useful to humans, they’re very detrimental to many insects and animals who rely on the dark hours.
Flashing displays created by fireflies occur late in the day when ambient light declines. Artificial lights at night can impede reproduction by reducing the efficiency of the bioluminescent signals.This results in a modification of the courtship behavior and mating between tethered females and free‐flying males. Light pollution reduces flashing activities in a dark‐active firefly species, by about 70% as well as courtship behavior and mating success in a twilight‐active species (Desouhant, 2019). Since the displays are much less noticeable with dark hours never occurring, there is a genetic advantage for male fireflies to have the brightest display. The brightest displays are those that are most likely to attract a female and reproduce. In dark conditions, the brightness of the flash was not the genetic advantage, but the intervals of time in between flashes. However, in an environment that shrouds the flashing display, it is more advantageous to be seen than to have a fancier display (Desouhant, 2019).
The shift from flashing display to the brightness of the display is due to human creation of artificial lights at night. This is just another example of a genetic change that would not have resulted if humans hadn’t molded the environment to fit their agenda. The small bulb you have on your deck or in your backyard has a huge impact on the evolution of fireflies. That light diminishes the bioluminescent display that the firefly creates in order to attract a mate. Instead, the firefly with the brightest display will be seen and given the chance to pass on its traits, which includes a brighter light instead of a fancier display.