​the evolution of Dung Beetles 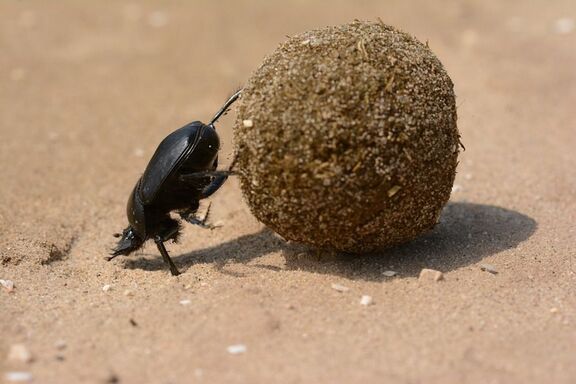 Do you ever look up at the sky at night and wonder what you’re looking at? Are the lights stars or planets? Or is it just an airplane passing by? Or possibly a meteorite or even a whole galaxy? The dung beetles are a very unique species that evolved special photoreceptors in their eyes capable of seeing stars. The Milky Way is used by dung beetles to roll their dung balls. A bung ball is used as either food which will be eaten over a period of days, a brood ball of which an egg is laid, or a nuptial ball some species used to attract mates. Dung beetles typically lay the dung in a straight line and then use the Milky Way to orient themselves so they can roll and maintain the straight line (Wild Life Sabi, 2010). While it may not seem as though something as simple as artificial lights used at night can impact evolution, it surely can in the case of the dung beetle. Because of artificial lights at night, dung beetles are unable to use this ability to see the stars and therefore need to adapt their way of rolling dung balls by praying on nearby beetles.
Artificial lights at night make it difficult for the dung beetle to see the stars. The artificial light from cities, homes, and roads drown out the natural light that comes from above. Light pollution clouds stars and planets from being viewed by the dung beetles. Oftentimes the light from cities is reflected off the clouds which confuses the dung beetles. Artificial lights at night makes it nearly impossible for dung beetles to roll their dung balls in a straight line. Because the strong smell that comes from dung beetles can accurately find the location of dung, there is large competition for the resource. Dung beetles need to work quickly in order to roll their ball. Having the ability to roll their dung ball in the straight-line conserves time and reduces the likelihood of their dung being stolen by another beetle (Desouhant, 2019).
With increasing amounts of light pollution, the ability to see the Milky Way is no longer a genetic advantage since it is impossible to see through the clouds or discern artificial light from stars. Because the dung beetles are becoming disoriented while rolling, their balls tend to be smaller and oftentimes are not returned to the dung pile. This largely impacts the consumption and mating processes of the beetle. Without a dung ball of a minimum size, the dung beetle will not be able to attract a mate, nor will it be large enough for an egg to be late. The genetic advantage is now quickness and the ability to steal resources from other beetles (Desouhant, 2019). The dung beetles are also trying to compensate by orienting themselves with the landscapes they can see above them.
In addition to stars and planets, there are numerous aquatic bugs that use geographical landscapes to orient themselves. This often includes coastlines, mountains, and landmarks to discern their location. Because artificial lights at night cloud these objects from the bugs’ view, they cannot properly locate themselves on the water. This has catastrophic consequences because aquatic bugs are crucial for colonizing restored aquatic habitats. Aquatic bugs are also responsible for the recolonization of streams recovering from disturbances or pollution (Perkin, 2013). Orientation for these aquatic bugs is crucial for many aquatic ecosystems. If the aquatic bugs orient themselves and locate the areas that need to be recolonized, this would greatly impact the evolution of not only the bugs themselves but also many sea creatures.
It is very clear the artificial lights at night and light pollution are the causes of the orientation disruptions seen in dung beetles and aquatic bugs. Artificial lights at night have major impacts on the evolution of both of these insects and the organisms that benefit from the habitats aquatic bugs colonize. We may not realize how the lights we use at night have profound effects on the organisms around us as we neglect to think about the not so obvious ways our technologies affect the environment.